I was a senior in college, taking a grad course in Constitutional Law, when I first learned about this disgraceful mistreatment of Japanese Americans, most of whom were American citizens by birth. Most midwesterners that I've asked about this were similarly unaware until they grew up and moved to California.

I think that part of the reason why this has not been more  publicly discussed is that people who were actually interned chose not to talk about it even with their own children.

A few years ago I researched this for an as-yet-unpublished children's book I was writing. A documentary called "Children of the Camps" featured six Japanese-Americans who were interned as children and was particularly poignant. There aren't many books about this experience written by people who went through it.

The 442nd Infantry Regiment was comprised of young men who went from the internment camps directly to boot camp. (Their family members remained in camp.) It sustained high losses in Europe and was one of the most highly decorated regiments in US history.

For the most part, the people who were allowed to leave the camps to work went to prearranged jobs in the eastern US. When the war ended, many of them chose to stay rather than return to California. (California has a particularly nasty history of denying such rights as property ownership to Asian-Americans.)

The camp at Manzanar was photographed by Ansel Adams and Dorothea Lange, among others. It is now open as a National Historic Site under the National Park Service. I haven't been there, but the photographs show a site that is simultaneously desolate and beautiful.

I just discovered a wonderful website, essentially an online book, that I wish had been available when I was doing my research:

Taffy, there is a beautifully poignant film that was made on the subject of Japanese Americans and the terrible sad injustices they incurred during and after WWII - "Snow Falls on the Cedars" (that's how the title translates from the Italian) I don't know what the original title was in English...did you see it?
________ 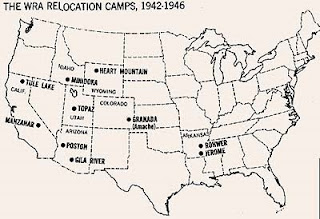 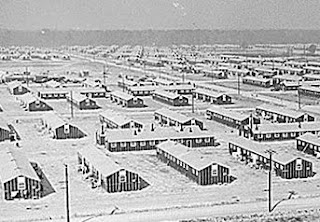 My family celebrated XMAS and Thanksgiving with a Japanese American family for many years.  Etsu and Henry were living in California, and both interned in WW II with their families when they were teenagers. They never talked about it until President Regan apologized and signed a bill providing $20,000 to each internee or their heirs.


Etsu then produced an amazing mimeographed Welcome Aboard brochure from her camp. It welcomed the internees to the Camp and explained the rules. The front illustration was of the camp surrounded by barbed wire, watch towers, and barracks.


Their families lost everything when they had to move with a few days notice from their homes to the camps.


This episode is a blight on America, and something we regret.


That said, however, these camps were nothing like the gulags of the Soviet Union. People were not murdered or tortured.  They worked and went to school.  Henry would probably have been in the Army - but he was not forced to serve, and he elected not to serve his country that had mistreated him.


Etsu actually joined the Army and served in Japan as a Nurse.  I am sure there had to be a great deal of confusion - A Japanese American Army Officer who could not speak Japanese.


The 100th Battalion, which later was merged into the 442 Regiment, was composed of Japanese Americans. They were the most decorated unit in World War II in the American Army. They were attached to my fathers World War II Division in Italy.

Our Blog and Web Site